The Most Wonderful Time of the Year

It's the most wonderful time of the year!  And by that I mean the holidays - because this is the time of year when I'm forced to shop, which I have a general distaste for.  What's wonderful about that, you ask?  Because to ease the sting of shopping in a mall, I see no other option than to sprinkle the day with visits to local record stores!  So I'm here to share with you my haul so far this holiday season. 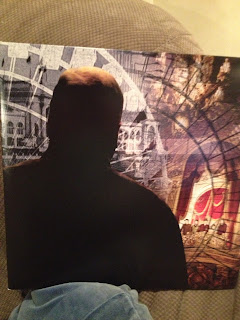 My Morning Jacket - Evil Urges (vinyl)
I saw this record at Joe's some time ago and picked it up and carried it around and pondered over the price tag and put it back.  We danced around like that for a while.  Somehow I had managed to never really hear anything by MMJ and I couldn't decide if I wanted to spring for the vinyl or just get a $10 download from iTunes.  So I put my quandary out there on twitter and received instant feedback.  Mostly in the form of "seriously, you even have to ask?" and mostly from one Dylan over at MoreThanAFeeling (trust me, you can trust his opinion) and Mr. Aaron Tap.  At that point, it was pretty much a no-brainer.
If you haven't heard this record, you really should.  I can't say that it's my favorite record of all time or anything, but it is pretty amazing.  The vinyl version is 2 LPs and includes a CD.  I'm not sure I've ever heard an album that covers this much ground.  I spend the entire time totally fascinated with Jim James' mind.
﻿ 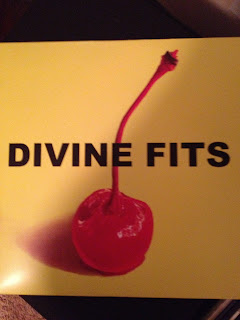 Divine Fits - A Thing Called Divine Fits (vinyl)
I picked this one up on a whim.  I had heard good things about Divine Fits and they're opening for The Black Keys in Las Vegas December 30 & 31, so I was intrigued.  There is a bit more synth on this one than I'm used to, but I dig it.  I haven't listened to it enough to get too in depth, but so far so good.  I also absolutely adore the cover art.  It looks like a photograph but (upon reading the liner notes) I discovered it's actually a painting (you can tell once you know) and it's just stunning.  I plan to look up the artist and see what else he's done.
﻿ 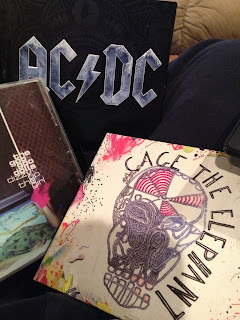 AC/DC - Black Ice
The Goo Goo Dolls - Dizzy Up the Girl
Cage the Elephant - Cage the Elephant
I found these in various used CD racks around town.  The new AC/DC album sounds pretty much like every other AC/DC album ever made which is just fine with me.  I love them, I've loved them forever.  "Shook Me All Night Long" was the first song I ever knew all the words to (which believe me, raised a few eyebrows on the school bus when I was a kid) so their music is pretty ingrained in me.  Some of my favorite memories from high school have this band playing in the background.  Good stuff.
As far as I'm concerned, The Goo Goo Dolls aren't a whole lot different than a lot of other bands that were around in the late 90's, but there are a couple songs on Dizzy Up the Girl that ﻿I happen to adore.  Namely "Slide" and "Black Balloon".  Still, I've never owned the album before, so when I saw it in the $1.99 box at a local head shop, I scooped it right up.  I haven't had a chance to listen to the whole thing yet; I hope I'm not disappointed when I do.
At some point somewhere I heard about this band Cage the Elephant.  I heard how unique their sound is and how everyone should be listening to them.  I added them to my "want" list and didn't give it much more thought.  Well I came across this CD for some absurdly low price so I grabbed it. On the way home I popped it in a lo and behold I already knew them!  Anyone who had listened to the radio in the last 5 years has surely heard "Ain't No Rest for the Wicked".  If not, do it.  Now. 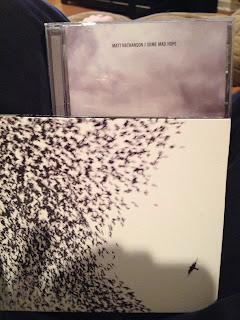 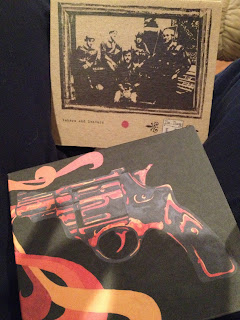 Dr. Dog - Takers and Leavers (EP)
The Black Keys - Chulahoma
These last four came to me during a trip to Grimey's in Nashville, TN.  Pretty much the best record store east of the Mississippi.  I ended up in Nashville for 3 days for a work thing and since it was the Monday - Wednesday after Thanksgiving, nobody I knew was over here playing so I spent the one free night I had at a record store (big shock, I know).  Grimey's is a crappy looking place in a questionable neighborhood that's hard to get into.  It's hard to park and a bit challenging to find the entrance (it's on the back of the building, upstairs - downstairs is a music venue called The Basement) but once you do, it's absolute heaven.  They have everything imaginable packed into a fairly tiny space.  There so much vinyl I almost OD'd on it.  I loved it.  I wish I was there right now.
Anyway, I picked up Matt Nathanson's Some Mad Hope which is a truly beautiful album.  I already have it on iTunes but I wanted a physical copy too.  So now I have one.  I also got Wilco's Sky Blue Sky because, once again, I've heard good things about them.  I haven't listened to it yet, but when I do, I'll let you know.  I got a couple EP's, Dr. Dog's Takers and Leavers and The Black Keys' Chulahoma.  Both are really good and really good examples of the bands' work.
Two girls I work with went to Grimey's with me and after we left there we stopped at Panera and got dinner.  We went back to the hotel and went our separate ways.  It was early, maybe 7:30pm or so and I happily snuggled into bed with my half turkey sandwich and half a greek salad and a diet coke and spent the evening talking to my husband on the phone and reading liner notes.  I got to unwrap the plastic from the cases (because even a lot of the used ones at Grimey's are wrapped) and inspect the album art and read lyrics and the names of producers and musicians and engineers.  I read every single "thank you" (and even found Aaron Tap and Paula Kelley lurking in there on Some Mad Hope) and date and city and it was wonderful.  They kept me company while I was away from home alone in a hotel room (for the first time ever, I might add) and just reinforced the importance of physical copies of music.  All that album art is put together for a reason - it's there to complete the experience of the album.  I think we owe it to the artists to go on the journey.
﻿
Crafted for your reading pleasure by Stephanie at 10:59 PM