Matt Nathanson - Beneath These Fireworks 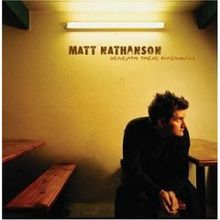 Ok, I'm going to go ahead and talk about Beneath These Fireworks and get it out of my system.  I feel like this is turning into The Matt Nathanson Blog, but that is so all I've listened to lately that it's not even funny.  I still have At The Point and the SXSW EP to review, but I can hold off on those. As you know, I got some Violent Femmes yesterday, so that's adding some variety to my play list.  For now though, still mostly jammin' to Mr. Nathanson.

So, Beneath These Fireworks.  This was his major label debut, but he had released 5 independent albums prior to this one.  Some sources say that he was dropped from Universal; I've also read that he didn't dig the "label scene" and got out of his contract just as this album was released.  Either way, they parted ways (huge mistake on the part of Universal) so the label didn't push this record and it just kind of slid in under the radar.  That, my friends, is a miscarriage of justice because this record is a beautiful thing.  I hesitate to say I love it more than Modern Love (and I've already said that record is perfect, so...) but I love it different.  It is an entirely different animal with only his mad lyrical skills and warm honey voice tying them together.  Plus, my current favorite song of his is on this record, so I have to love it, right??

Because of the label affiliation (and Matt's overall awesomeness) this record is littered with a who's who of musicians.  It features people like Jamie Muhoberac on keyboards, a studio musician who has played with the likes of Fleetwood Mac, The Rolling Stones and Bob Dylan.  Matt Fish (who Matt Nathanson toured with) plays cello on it and Emm Gryner sings backup on "Sing Me Sweet".  The coolest addition for me is Glen Phillips of Toad the Wet Sprocket singing backup vocals on "Pretty the World" and "Sad Songs".  How cool is that??  (Don't know Toad the Wet Sprocket??  Hurry, go buy their album Fear, listen to it, and come back. I'll wait...)

Getting back on topic, Beneath These Fireworks is just a really great record with some brilliant writing.  The lyrics on this one hold out through the entire record.  There are no awkward moments, no times when you wonder if maybe he was at a loss.  Of course, I have yet to hear any of his songs that have questionable lyrics and that's not true for everyone, even some of my favorites (just wait until I review Save Me, San Fransisco *sob*).  Overall, this record isn't nearly as sad as Some Mad Hope.  Sure, the songs are all laden with emotion and some of them recount some apparently painful experiences, but is just more upbeat and less dreamy and melancholy.  I think maybe he sounds more angry or bitter on this one, which for me is always less tragic than the defeated sadness that permeates Some Mad Hope.

"Suspended", the second song on this record is my current favorite.  It's tough to pull just one line out of this song to illustrate it's awesomeness.  However, my personal favorite is: "With your breathing, filling up my lungs, I can almost believe, that I'm almost enough."  This song feels like an anthem for dead-end relationships.  One person isn't satisfied with the other but pretends to be.  So the other person, totally in love, clings to that pretense and just goes with it.  As a result, nobody goes anywhere and they end up...well...Suspended.

In close competition for the title of My Current Favorite is "Pretty the World".  You've heard me praise this song before, I've even tweeted the accolades of this song.  It's just that good.  It's fast and peppy and with lines like, "And I'll lie, until I believe" it is too fun to sing in the car.  Plus, this song has a little bit of magic in it.  Technically, musically, I'm not sure what it does (I can read music and play piano some, but I don't really grasp things like chord/key changes and whatnot), but I do know that the verse dances around inside your head, then the chorus drops down into your chest and you can physically feel it.  The song is written in the key of magic.  My wish for you, is that you someday get to hear him play it live so you can really feel it.  Like so many of his songs, when performed live, you don't just hear them with your ears, you 'hear' them with your entire body.

"Curve of the Earth" follows "Pretty the World" and it stands right up to it.  "Tell me does he look like me at all? Cause they're all an awful lot like you."  What woman hasn't wanted to hear that from her ex?  To know that she affected his ass like that, to influence every future relationship.  Things quiet down then with "Bent", a heart breaker.  "You're so sorry about it all, now that it's over, should I thank you for that, Dear?"  He asks, basically, if I had done things differently, if I had done things the way you said to, would you have still destroyed me?  Which of course, she would have, but now she's sorry about it all so that's supposed to make it all better. Um...no.

This record explores relationships that have just gone wrong, for whatever reason.  Either party can be to blame, or maybe nobody is, maybe it's just the way life goes.  Sometimes relationships just crumble under the pressure of real life, such as in "Weight of It All":  "Show me where the sun comes through the sky, I'll show where the rain gets in and I'll show you hurricanes and the way that summer fades, underneath the weight of it all."  Or, as in "Bent", you just ended up involved with someone who has a habit of breaking people and there isn't shit you can do about it, "If I bent, like you said was best, would that change a thing?  If I spent myself till nothing's left, would you still leave me here?"  We know by now that Mr. Nathanson very rarely writes a song about a lovely, wonderful, healthy relationship.  Of course, those don't generally inspire the angst that breeds creativity.  (But if you have to have one, check out "Drop to Hold You" on Modern Love...just sayin'.)

Still, with all the pain and turmoil on this record, he manages to close it out with a happy little song that leaves a "sweet" taste in your mouth.  In "Sing Me Sweet", he has apparently found something great: "Say you'll never let me go, cause I've gone long enough, waiting for wonderful."  So once again, we're left hopeful, that true love is out there and maybe he has it.  Because when you listen to this record, all you hope is that someone has come into his life who makes it all ok.
Crafted for your reading pleasure by Stephanie at 8:49 PM

Email ThisBlogThis!Share to TwitterShare to FacebookShare to Pinterest
Labels: Beneath These Fireworks, Buy It, Love It, Matt Nathanson, Toad the Wet Sprocket