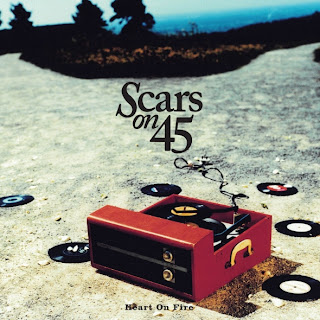 I finally got Scars on 45's new release Heart on Fire EP tonight.  Apparently their song was featured on Grey's Anatomy, but I never watched that show so when I saw them open for Matt Nathanson (there's that guy again) a couple weeks ago, that was the first I had heard of them.  Even though I couldn't sing along, their set was fun and I looked forward to getting to know their music better.  So far, I'm on listen number 4 and I'm really enjoying it.  Of course, having already heard them performed live I have an instant affinity for these songs.

It really isn't logical for me to like them since I'm not usually a fan of bands with multiple lead singers and I have very few female singers in my collection.  However, these two both have really good voices and they harmonize beautifully, so I'm just going with it.  Right off, my favorite part is the fact that you can really hear Danny Bemrose's English (or British...which is right?) accent (particularly on "Heart on Fire") when he sings, which is rare.  That's another thing I enjoy, like the breathing thing, I can't explain it, I just like it.

This Heart on Fire EP is only 4 songs long and I'm not sure that's enough for me to really get to know this band.  That being said, each of the songs is unique, so there is a good sampling here of what they have to offer.  "Heart on Fire" is a big, full love song full of longing and genuine emotion (especially when performed live).  It is followed up by "Tomorrow Won't Die Too Soon" which does a really nice job of featuring both voices.

I think my favorite of the four is "Two-Way Radio".  A tasty little tune about two people getting through the hard times and getting back to a good place.  With lines like, "They can take what they want, you're my only obsession now," you cannot deny this song.  The final track, "Promises & Empty Words" features the female singer, Aimee Driver's soft melodic voice.  In it, when she sings, "I'll never hear another lie fall out of your mouth...why should I be the one to give this everything?" who can't relate to that?

This collection of songs is driven by an insistent drum beat and well-crafted harmonies that make you want to keep listening and really should appeal to just about everyone.  While the gentle melodies don't inspire me to dance around (although, they did when I heard them live), I definitely look forward to knowing the words so I can sing along!  The only thing stopping me from loving this collection is time, but I'm pretty sure after I've had time to get attached to it, it will fall in the "love it" category.
Crafted for your reading pleasure by Stephanie at 9:09 PM

Email ThisBlogThis!Share to TwitterShare to FacebookShare to Pinterest
Labels: Buy It, Heart on Fire, Like It, Scars on 45