Saturday, my husband and I went to Nashville, TN to see Matt Nathanson perform at The Cannery Ballroom.  The Cannery Ballroom is a standing room only venue that holds 1,000 people, so this promised to be an awesome show.  We got there about an hour before the doors opened and there was already quite a line forming, but once some people wandered to the merch table and others congregated at the bar, we ended up about 5 people back from the stage.  We could literally see the whites of their eyes.  Sweet. 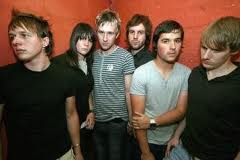 (Picture from Google Images)
The opening band was Scars on 45.  They are a bunch of kids (seriously, there are like 6 of them...I wondered for a second if we had wandered into a George Clinton show) from England.  I had never heard of them before I found out they would be playing that night, so I wasn't familiar with their songs.  (You won't want to miss their first EP and you really don't want to miss the second one!) There are 2 singers, a man and a woman.  The woman, Aimee, I believe, seems to have a more outgoing personality and did the majority of the talking.  I thought they did a good set, they were into it (especially the keyboard player!!) and they seemed to have a good time.  I felt kind of sorry for them because it was clear that nobody really knew them, but I thought the crowd responded to them nicely.  When they performed 'Heart on Fire', their new single, he sang that thing like he really meant it and that was cool.

After their set, while we had some time to just stand around and sweat, it dawned on me that it was unbelievably fucking hot in there and also, if the place caught on fire, we were screwed.  Being rather claustrophobic, I chose to just talk to the woman next to me (a very friendly lady from Nashville) and focus on making sure my view of the microphone didn't get blocked.  That takes a lot of work when you're standing with 999 of your closest friends and they ALL want to make sure their view of the microphone isn't blocked.  But I was successful and had a clear, unobstructed view of Mr. Nathanson throughout the entire show.  In fact, I was right in front of him, so it was easy to forget all about the other people in the room and just enjoy.

When I first pondered this post, I thought I'd go through the whole set list, but I see now that if I did that, this post would be five miles long.  Also, it would take me the rest of the year to write it.  So I'm just going to hit the high points.  First of all, here's the set list (as best I can remember...I may have a couple things out of order and I know I'm missing a couple covers that he dropped in the middle of his songs, but you'll get the idea):

Mercy
Dog Days Are Over (Florence + the Machine) led into Pretty the World
Modern Love (I have a little video of this...I'll post it soon)
Bottom of the Sea
Queen of (K)nots
Laid
To the Beat of Our Noisy Hearts
Kiss Quick
The Boxer (Simon & Garfunkel)
Bare
Angel
I Saw
Room @ the End of the World
Detroit Waves
Drop to Hold You
Faster
Come On Get Higher
-encore-
Car Crash (interspersed with CeeLo Green's 'Fuck You')
I Fought the Law (The Clash)
All We Are
*(He also covered the Violent Femmes 'Blister in the Sun' because the crowd coaxed him into it, but for the life of me, I can't remember where it was in the set list)

If you're looking at that set list and thinking it is long and I must be exaggerating...no.  He played for the better part of 2 hours.  Which is really remarkable because given the heat out in the crowd, I can't fathom how hot it must have been up there under those stage lights.  Also, it was the last show of this leg of the "All Night Noise" tour, but he gave us energy like it was the first show.  For me, even after standing (in line, while waiting, during the opening act, during intermission...for hours is my point) the set still flew by in a blur.  Who knew 2 hours could pass that quickly??  I guess it's true what they say about time and having fun. 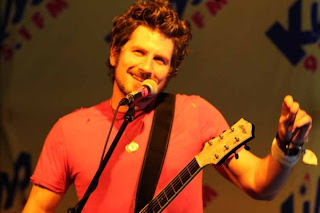 First, he came out to Superman's theme music, so you immediately have to love that, then they opened with 'Mercy' - just as I hoped!  When he performs that song live, it just jumps inside you and takes control.  Next, he takes Florence + the Machine's (yuck) song 'Dog Days Are Over', makes it something you actually want to listen to and then morphs it into 'Pretty the World'.  When this song drops into the chorus, the world seems like a better place.  But when he plays this thing live and it drops into the chorus, the world actually becomes a better place.  How can you not physically react to this song?  Not possible.

My next favorite moment was 'Bottom of the Sea', because I love the shit out of that song and it was so much fun to watch them play it and to sing it back to him (even if he did hesitate before "sea" and make us all sound like snakes).  At some point, he played the opening to 'Blister in the Sun' by Violent Femmes.  The crowd went nuts and begged him to play the whole song.  He claimed that they didn't play it well (not true) and that we'd have to sing along and help them out.  After promising they would, it turned out that the crowd didn't know that song all that well, but those of us that did sang the crap out of it and Matt and the band did a great job with it.  I'm not sure they thought so, but it was a great time and we sure didn't notice whatever they thought was less than perfect.

By far, my favorite thing about this whole show was 'Kiss Quick'.  Good grief, I had no idea how mind blowing that song is until I heard it live.  It was...I don't even have words for it.  His voice, his delivery (all that intentional breathing...you know my weakness for that), the way the music dripped into my head and just held me in its grip.  The people around me, the heat, me aching feet...it all just melted away and I was just held there - suspended (if you will) in the magic of that song.  It killed me, it absolutely killed me.

After that (I think), he and Aaron covered 'The Boxer' by Simon & Garfunkel.  I hesitate to say they out-Simon & Garfunkeled the original...cause come on, be for real, but they did an excellent job with it.

I also have to mention 'Drop to Hold You'.  Another song that is at another level live.  If you were there with your someone (as I was), it was all that much better.  "You came round, to save me, and I drop, to hold you".  It is a huge song, it swells and undulates and takes over the room.  He released us back into the world with 'All We Are' ringing in our ears.  "All we are, we are.  All we are, we are.  And everyday's the start of something beautiful, beautiful."

This show was 2 hours of absolute escape from every unpleasant thing in the world - a week in New Orleans didn't even do that for me!  Throughout the entire show, pretty much every song was like, "Oh my god, I can't believe he's going to play this one too...YAY!!"  I know I didn't mention every song he played, but trust me, they were all amazing. (Also, the hair was epic.)  Do yourself a couple favors...go out and buy all of his CD's (ok, maybe that's a little cost prohibitive...at least get the last 4 or 5) so you'll know the words, then go see him in concert, you will not regret it.
Crafted for your reading pleasure by Stephanie at 2:58 PM