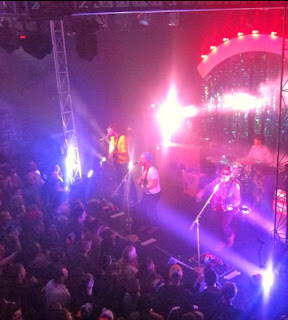 Once again, I didn't take this pic (I'm sticking to my no phone at concerts policy), we were a bit closer than this, but this was basically our view

*These I know are in the right place.

You know how with a lot of things in life, the anticipation of it turns out to be better than the actual event?  Yeah, well, a Dr. Dog concert is most definitely not one of those things.  We hit Headliners Music Hall in Louisville last night for the second time in two weeks to see Dr. Dog and they absolutely blew the roof off the place, as expected.  It had been a little (15 days) less  than a year since we saw them last and, if I have any say in it, it won't be that long before we see them again.  They are so good live that's it's absolutely astounding.

Their openers, Benny Yurco and the Revealers were a fun, eclectic five piece band.  Their playing was a little loose and jangly, but they had the attention of the audience and they put on a good show.  We had decided to go up to the balcony for this show, so we had a cool looking-down-on-them kind of view of this show.  The Revealers had a very intricate percussion section that was fun to watch from above.  I wasn't familiar with their music before the show, but you didn't need to be in order to dance along to it and enjoy it, and that's the hallmark of a good opening band. They did one cover, You Just Keep Me Hangin' On by The Supremes (or Vanilla Fudge, or Kim Wilde) and the crowd really got into it.  They seemed a tad bit stifled by the tiny space they had available on what is already a small stage, but they made it work and I thought they did a good set.  After that, we got to watch the guys disassemble The Revealers' equipment and set up for Dr. Dog.  It was a pretty involved process that took over 30 minutes, but it was cool, the anticipation was just building the whole time.

Finally, it was time for the main event and they came out and opened with The Truth off their new album B-Room.  It went over pretty well and proved that lots of people in the crowd already own and know the new record, which was cool.  But things didn't get really cranked up until they laid into Heavy Light from Be the Void.  This is when the crowd really got drawn in and began that bobbing in unison thing that happens at every Dr. Dog show.  I knew once it started that it wouldn't stop until the lights came up, and I was right.  They turned Heavy Light into an amazing acid-rock inspired jam session that was quite heavy indeed.  It's a great song made even better last night by their embellishments.  The set list included several favorites off Be the Void which I was pretty excited about because I love the shit out of that record.  Once again they played That Old Black Hole (still my favorite), These Days and How Long Must I Wait?  All the songs from that album are huge crowd favorites and always get a great response.

They also dipped back in their bag of tricks last night and pulled out Say Something and Oh No, both from 2005's Easy Beat and Heart it Races from the 2007 Architecture in Helsinki Heart it Races EP. All three songs proved that, young though they may be, this crowd was a bunch of long time Dr. Dog fans (or at least the kind of fans that have gone back and collected the older CDs).  It certainly wasn't only the new songs that were being appreciated last night.   However, my favorite moment of the night was when they played Too Weak to Ramble.  I had hoped for a slightly simpler arrangement on this one, I would have been happy with an acoustic guitar, Toby's voice and Scott's delicate harmonies, but we got a little more band involvement than that.  As it was, the crowd was a lost a little bit on this one and they got kind of chatty during this song.  That disappointed me because it was beautiful and powerful and I wish audiences these days could just be still (and shut up) for a second and appreciate a moment like that when it's given to them.  But, regardless of what everyone else was doing, I was right there with him.

One thing that I've come to realize is that there isn't a lot of chatting with the audience at a Dr. Dog concert.  They've come to play their songs and they let the music do all the talking for them.  Which is not to say they don't have any personality, because they do.  They're friendly and seem like nice guys, but they just get up there and play their guts out and go home, that's what we came to hear, that's what they came to do, end of story.  And it's a good thing I guess, because with a set list that size, if they were talkers, we'd still be there right now (although honestly, I'd be cool with that).  Problem is, they keep adding amazing records to their repertoire, but you can't neglect Fate or Shame, Shame just because B-Room wants some air time, right?  And they certainly didn't.  Last night, there was a little something for everybody and there was no reason anyone should have gone home unsatisfied.

They closed the show with Jackie Wants a Black Eye from Shame, Shame and Lonesome from Be the Void.  Both perfect closers and when one is followed by the other, we were really wondering what kind of encore they could possibly come out with after that.  I mean, both songs are huge and permeate the crowd and have them swaying together and screaming along to the refrains of "We're all in it together now, as we all fall apart!" and "What does it take to be lonesome? Nothing at all!!"  How can you possibly follow that?  Well, if you're Dr. Dog, you follow it with a five song encore of some of their old favorites plus the one song off the new album that you know is going to over the best live, that's how.  After the audience screamed to the point that my left ear still hurts, they finally came back out and started the encore with The Way the Lazy Do from their 2007 release We All Belong.  I love that song!  How did they know?  Then there was The Beach which was really amazing live (I really think this was during the encore, but maybe I'm nuts, my brain was all scrambled on Dr. Dog awesomeness by this point), and the Dr. Dog live show classic Die, Die, Die from Takers and Leavers EP.  As always, we were thrilled to hear that one again.  Then Toby did an astoundingly energetic version of Rock & Roll from B-Room.  How he had that much energy left after such a long show, I'll never know, but it was incredible and the song was just as great live and I had hoped it would be when I heard it on vinyl the first time.  They closed the show with one of my all time favorites, Fate's The Rabbit, the Bat & the Reindeer.

Once again, it was just as mind blowing as I had hoped it would be.  Nothing existing while you're inside that venue except the music and the lights and the awesomeness taking place on stage.  When the show is over, you just want more, it's never enough, but when watching them perform, you know you've already gotten everything.  They leave it all on stage every night, I don't know how they do it.  And they are such talented musicians, just watching them play the intricate guitar parts on their songs for two hours is a treat for me.  Then add in the way they can trade instruments back and forth like it's nothing and you realize just how talented these guys really are.  The most fun was watching Scott and Toby interact on stage (or, I should say, effortlessly not interact).  They're both bouncing around all over the place and yet, somehow know where each other are all the time.  And even when they do make contact, it's not the collision you'd expect.  I mean, seriously, they literally stepped on each other's feet at one point and there was no stumbling or awkwardness.  I'm sure it comes from so many years of playing together and just being so comfortable on stage together, and it a joy to behold.  In fact, that pretty much sums up a Dr. Dog show, even the heavy parts, it is two solid hours of joy.
Crafted for your reading pleasure by Stephanie at 9:48 AM