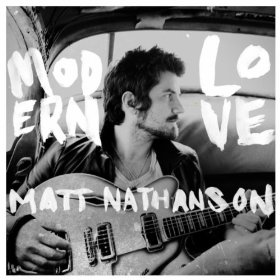 Ok, I just bought Beneath These Fireworks and it has inspired me to go ahead and review Modern Love.  I've pondered this record since I first got it in August.  After many, many plays, I've determined that it is not an exaggeration to say it is perfect.  I thought I would wait until I had a favorite song on the record before I reviewed it, but that hasn't happened.  As soon as I think I like one best, another one says, "Hey, what about me??" and I flounder.  They're just all so freakin' good.  Some of my favorite lyrics I've ever had the sheer pleasure of singing (badly) in my car are on this record.

On Modern Love, Matt Nathanson brings all the passion and sexy that I want when I listen to Some Mad Hope and then some.  He takes that one "so right" in "Come On Get Higher" and spreads it out all over the record.  The ups and downs of love have never sounded as entertaining as they do on this album.  The first single, "Faster" explores the human contact side of love.  The actual connection between two people that cannot take place on Facebook or via text message or Skype.  At the same time though, if you pay attention, you know that it also acknowledges the danger of actual connection, "You turn me over and over, till I can't control myself, make me a liar, one big disaster."  Which I have to assume translates to, "Yes, you make me hot, so much so that I lose my head, but you treat me like shit, so I keep saying I'm going to leave you but...you make me so hot!" (Which, admittedly, is a much less...um...lyrical way of putting it.)

Next up is the title track, Modern Love - which was my first favorite song on the record.  I played a groove in the CD (is that possible?) on this one.  It's so damn catchy and clever.  "I'd burn my house down, just to hear 'em scream my name" - how can you not love that??  And seriously, "taco truck"?  Shut the fuck up.  "Modern Love" is followed up by two scrumptious little love songs: "Love Comes Tumbling Down" and "Room @ the End of the World".  Both explore the connection (or lack thereof) between people in this world.  He spends a lot of time on this record exploring that place where the warm, moist, touchable parts of us bump up against the hard, cold, disconnected parts of our society.  And he makes you believe that all he wants is to hole up in a room at the end of the world with that special someone and revel in the human element of love.

"Kiss Quick" is one of those songs that after it plays, you just go ahead and skip back to the beginning because you know there is no way that once is enough.  Even when played loud (trust me) you strain to hear this one.  His delivery on this song is warm and sexy and perfect.  There are few things I enjoy more than being able to hear the artist breathe during a song and there is a lot of that here (really on the whole record, but it is at its breathy-sexy peak in this song).  For some reason, I love that shit.  "Kiss Quick" is slow and quiet and is followed up by the upbeat, peppy "Mercy" which is my current favorite.  I would have to post the entire song (and a link to it) here to accurately portray the awesomeness of it.  I could listen to this song over and over all day long.  I hesitate to admit that I've actually done just that...but it's possible. Never has our obsession with fame and it's fleeting nature been so damn entertaining.

Next up are "Kept" and "Run" - two beautiful, passionate songs that display Mr. Nathanson in all his glory.  Both of these songs are crushing, in the best way possible.  "Kept" is a warm, slow tune about being drawn into and held by a bad relationship by your heart strings.  For "Run", he teamed up with Jennifer Nettles and Kristian Bush of the country group Sugarland.  It revels more in the sexy side of love.  After these two, he hits you again with another of those upbeat tunes.  This one, "Queen of (K)nots" is about a relationship that, when it's bad, it's horrible, but when it's good, it's mind blowing.  This song, an awesome tune all the way through, has my second-favorite line on the record: "I won't be there, when the luck runs out, no I won't be there when the word gets round, cause you're someone else's baby, yeah you're someone else's crazy now!"  Ugh.  Lyrical genius!!

This gift to eardrums everywhere wraps up with "Drop to Hold You" and "Bottom of the Sea".  The former being a huge, swelling song that builds up around you and wraps you up.  I can think of few better ways to spend 3 minutes and 39 seconds than listening to this song.  Finally, "Bottom of the Sea", kind of peppy, a little quirky, it suggests an alternative location to living on this planet that we've destroyed in a fucked up society.  Also, this song contains my favorite lyric ever: "I'm tired of getting even, let's get odd, odd, baby."  Ok, maybe it's not a soul crushing line, but it is so fucking clever, it is impossible not to love.

My point here is this:  buy this record. I have it on CD, MP3 and vinyl.  If he released it on cassette or 8-track, I'd probably buy that too.  It is just incredible, easily one of the best (if not THE best) records I've heard in 20 years.
Crafted for your reading pleasure by Stephanie at 11:44 PM