As I may have mentioned a time or two, we went to see Matt Nathanson at Headliners Music Hall in Louisville, KY last night.  I have seen him twice before (at the KY State Fair and at Cannery Ballroom in Nashville, TN) so I was pretty sure it would be a good show and for the most part, I was not disappointed.  Honestly the only thing that let me down about this show was lack of connection between them and the majority of the audience.  Personally, I was right up front (literally touching the stage) so I was pretty caught up in what was going on up there, but I was still kind of irritated by the way the crowd seemed so flat.  Unfortunately one excited person doesn't a good audience make and I guess I just don't contain enough infectious enthusiasm to excite 599 other people.  I'm not a fan of it when people think their only responsibility is to buy a ticket and show up.  I don't appreciate being stuck in a room full of people that don't seem to grasp the give-and-take of energy that should be happening during a live show.  And I honestly felt bad for Matt, Aaron, Shiben, Konrad and James because they were up there doing their thing and the audience just wasn't reciprocating like they should have. Given some recent conflict with a fan (who was a complete idiot in my not-humble-at-all opinion), I can see where maybe Matt would have been a bit...off...and I hate that anything like that might have happened to keep the stars and moon from aligning just right Friday night.

Anyway, Rachel Platten opened for them and I don't know if you're familiar with her, but you really should be.  Not only is she just about the cutest thing I've ever seen, but she has a great voice and absolutely plays the shit out of that piano!  I thought she had a really good set, it was fun and full of energy.  She did "Don't Care What Time It Is" and "You Don't Have to Go" which are a couple of my favorite songs off her record Be Here, so of course I was happy.  In a way, I wanted to hear her to "Remark" live, but (even though I love it) that song makes me feel so sad that I'm kind of glad she didn't.  I was disappointed to see that I appeared to be about the only person singing along.  I mean, what's wrong with people?  If you know who's opening, don't you think you owe it to them to at least check out their music before the show?? I just happened to really like her, so now I know all the words, but they could have at least learned a chorus here and there.  Anyway, regardless of the crowd, I thought she killed it and it is so fun to watch somebody perform who is still so excited when people clap and are supportive of them. ***Edit*** Somehow I forgot to mention that Rachel's rendition of "Gin and Juice" is pretty much my favorite thing I've ever heard.  That alone was totally worth the price of admission! It was a perfect blend of hilarious and awesome.  Loved. It. 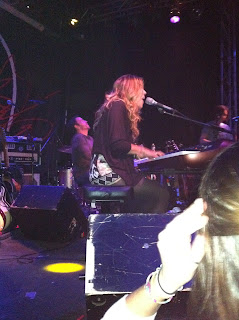 Rachel Platten & Crew Getting Down
In between sets we got to watch Aaron Tap tune guitars and set stuff up, which prompted my husband (who has a degree in IT) to say, "I didn't realize you had to have a degree in IT to play guitar!"  I had never been that close to the stage and all the gadgetry really is remarkable.  I have no idea what any of that very complicated looking stuff does, except that it makes magic.  He was literally right in front of us, but I controlled my urge to yell "You're awesome!!" because he was working and I didn't want to be that weird girl (or, you know, I didn't necessarily want everybody to know that I'm that weird girl).  My ability to not flip out was tested again when Aaron noticed my Ryan Schmidt shirt right away when they all came out on stage to perform.  The mature adult in me said, "Hey, that was pretty cool" while the fangirl that lives in my heart totally shit her pants. 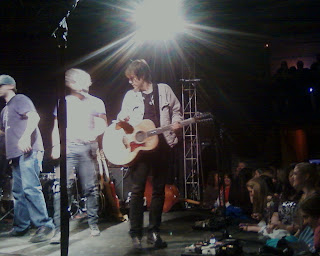 Aaron Tap - Tuning
They opened the show with "Kiss Quick" off Modern Love which is an incredible song both live and on the record - especially on vinyl for whatever reason.  Problem was, the sound was a little jacked for that one and I just wasn't ready for it.  I got used to them opening with "Mercy" and I'm not saying the set list should be the same for every show by any means, but to lead with "Kiss Quick" just threw me a little.  Maybe the whole audience didn't know what to do with that, maybe that was part of their problem.  I don't know.  Still an amazing song though and I'm glad I got to see it (feel it) live again.

I thought the whole show was great because I think these guys are awesome and I find just being there and watching them do their thing to be a pretty sweet experience but it wasn't the mind blowing magical experience I had when I saw them in Nashville.  Nevertheless, a couple highlights for me were "Bottom of the Sea" because I just dig it and every time I get to hear it I'm happy about it.  I attempted to record it, but because I'm a little dumb sometimes and not used to recording/taking pictures of stuff, I didn't actually record it, so you know...oops.  I did get "Sing Me Sweet" taped though so I'll post that here at some point.  It's a pretty good video too if I do say so myself.  I also really got into "Wedding Dress" and "Gone" - two I had never seen him do live before.  They were cool because they're heavy and I love those live songs where you can just close your eyes and let them carry you.  Good stuff. 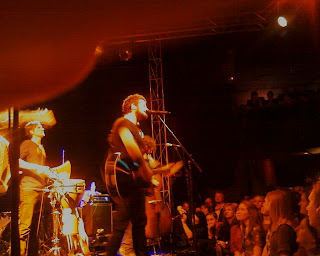 Konrad, Matt and Shiben (well, his hair and his bass) - Rockin'
Overall, the performance was everything I had expected, but there just wasn't any energy bouncing back and forth between the stage and the audience at all.  The guys even had some awesome rock show moments when they were playing the hell out of those guitars - Matt was getting feedback off the amps, Aaron was against the wall just going to town and still, people just stared at them and didn't get into it.  I mean seriously, what the fuck? Having seen these guys before, I am inclined to blame the audience almost entirely, but after discussing it with someone who is blessed with more perspective than I have, I'm not 100% certain that's the case anymore.  I'm sure musicians have off nights, everybody has off times, but I still think a great audience can help them through that - this audience just sucked the good vibes out of the room, if you ask me.  Bummer.  I saw via twitter that their show in Champaign, IL tonight was incredible and I'm glad - I hope they had a great audience.

However, most exciting (and the part that made my night), I got to meet Aaron Tap briefly after the show and he signed a couple things.  He was very friendly and I really appreciated him taking a minute to chat while he was packing up his stuff and after they had just played and he had to be tired.  I think I mostly managed to act like a normal human being even though I was totally freaking out - but I probably acted like a spaz. That's cool, it happens.  I still have an unsigned copy of Modern Love on vinyl.  At some point I'll track down Matt and get that bad boy signed too.  They're playing just a couple hours from here tomorrow night, but with it being tax season and all, it just didn't work out for me to go to that one.  Hopefully this summer I'll get another chance! 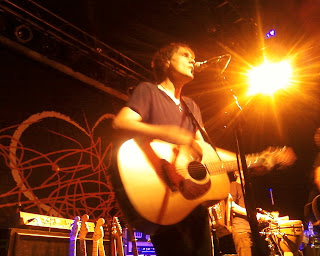 Aaron Tap - Singin' and Strummin'
Here's what I can remember of the setlist (totally out of order I'm sure, except I know they opened with "Kiss Quick" and I know that the encore is right):
Kiss Quick
Modern Love
Queen of (K)nots
Bare
Sing Me Sweet
Little Red Corvette
Blister in the Sun
Laid
Bottom of the Sea
Room @ the End of the World
Run
Wedding Dress
Detroit Waves
Car Crash
Gone
Encore:
Drop to Hold You
Faster
Come On Get Higher 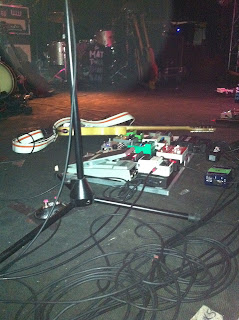 Crafted for your reading pleasure by Stephanie at 11:36 PM