Let me start with the most recent live show I've been to - the Matt Nathanson, Train, Maroon 5 show at the Kentucky State Fair August 28th.

Ok, some background.  My sister and I drug our husbands to the Train show at the Louisville Palace Theater in 2006. It was wonderful.  Even the men were into it and we were all blown away by Pat's voice and his ability to completely own the shit out of that place.  Then, we took the men folk to see Augustana, Maroon 5 and Counting Crows at Riverbend a couple years later.  Another awesome show.  Adam Levine totally stole the show from Adam Duritz (who I love) and showed him how it was done.

SO, when we heard, way back in February, I think, that Train and Maroon 5 were going to be on the same stage...IN LOUISVILLE...there was no freaking way we weren't going.  So we got our tickets in March - floor, 20 rows back.

The night before, we found out that Pat had blown a register in his singing voice and had postponed the show in Erie, PA.  Because Train never cancels a show and that's his hometown, we feared for our little Kentucky State Fair.  Of course, we wanted him to take care of his voice because we want new Train albums for many years to come and he seems like such a nice guy you never want to see him suffer, but we were also DYING for this show.  Luckily, the show went on.

When we finally found how who would be opening for them (about a month ago) I am deeply ashamed to say that I had never heard of him.  Who is this Matt Nathanson guy?  So I googled him and found out that I should know him, but I have been so wrapped up in stuff I already loved that I hadn't listened to the radio in literally years, so it was tough for me to hear new and different things.  I raced to iTunes and grabbed Faster & Modern Love.  I wore them out over the next week or so, so I decided to go ahead and download the entire album. My eardrums were in heaven!!  This guy could not only put together some beautiful lyrics, he could straight sing the shit out of them too (but the review of that album is to come, so I'll stop there).

After a month of OD-ing on Modern Love and Some Mad Hope (which I also snagged asap), I was pumped to see what this guy could do live.  He opened with Mercy (one of my faves) and the drum was doing that beating in your chest thing that makes your heart go along with it and I was in love.  Love at first note, you could say.  Then he sings and, oh sweet mother, he sounds like...no,no, he sounds better than the recording!!  The only other time I've witnessed that is when Pat Monahan sings.  So not only does Mr. Nathanson have a beautiful voice the he seems to have total control over, but he is also very personable on stage.  They flat blew the roof off that place, and even though only a handful of us seemed to be of the knowing-all-the-words devotee variety, he got an enthusiastic standing-O.  I was transported.  I had read somewhere (his blog, probably) that he was embracing the sexualty of things and he is not kidding.  I wish it had been an over 21 show so we could have gotten a more uninhibited view of his personality, but somehow he even made scrabble sound sexy.  :-) 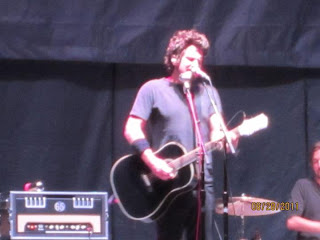 Then comes Train.  We feared for our beloved Pat's voice, but he did not disappoint.  His speaking voice was scratchy and when he sang you tell he was working hard, giving it all he had and sure, maybe you could tell that it wasn't exactly like he'd want.  But his voice is such a beautiful instrument that it was still an absolute pleasure to hear.  His showmanship did not disappoint either and, once again, this itty bitty dude became a huge presence on stage and wrapped us all in his energy.  He came around through the crowd while singing "Merry Me" and TOUCHED MY HAND!!!!!  (ok, fan girl moment over)  (but it was pretty cool).  Jimmy was looking great, as always, and played his ass off for us.  It was a great set - it was dancing and singing along and sweating and being overcome by every sweet, warm, fuzzy emotion that Train music brings on. 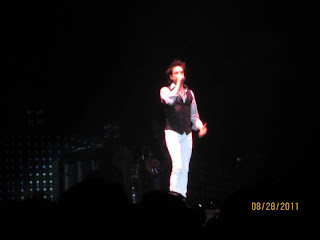 Then comes Maroon 5.  Ok, we all know that Adam is attractive (what can I say, the night was full of hotties) and believe me, when he is on stage, he knows it too.  They ran through their songs like they had somewhere to be (of course, they did - Florida, the next day).  But I had to drive 2 hours home, then get up at 6am and I wasn't in a hurry for them to get off stage.  I don't really recall him even talking to the crowd until they came out to do their encore.  At that point he had a lot of personality and was very friendly but it was almost too little too late for me.  They sounded good, rocked the house, all that, but I could have used a little more of him acting like he cares about the crowd and the fact that we're there supporting his band.  Don't get me wrong though, I'm still a major M5 fan and I will sing (off-key) at the top of my lungs and seat-dance in my car to their music for as long as they keep making it...and then some. 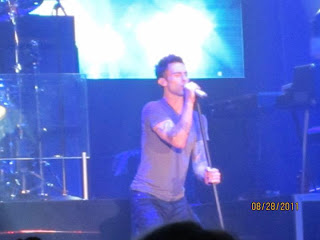 Overall, it was an amazing show.  The amount of talent that crossed that stage is staggering.  Train and M5 did enough old stuff to please those of us who have been fans since the first record and Matt Nathanson played a set that far outshined any "opener" status he might have had.  I hope to get down to Nashville to see him headline at the Cannery Ballroom in November (a small venue...standing room only...awesome!!).  I would highly recommend going to see any of these guys if they come within driving distance.  They are true artists and amazing showmen and you will not be disappointed. 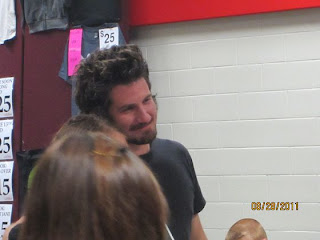 Crafted for your reading pleasure by Stephanie at 5:31 PM