Album: Blind Melon (you know, the one with the bee girl on the cover)
Artist: Blind Melon
Release: 1993 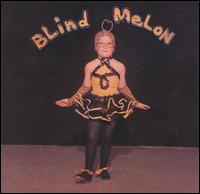 Another one I came to own when I was 15...apparently 1993 was a good year for me musically.  I didn't actually buy this record originally.  In fact, I had it on cassette and I finally bought it probably 12 years later when I wanted it on my iPod.  My best friend at the time loved, loved, loved 'No Rain', so her boyfriend bought her the tape.  If you've ever heard this record, you know that the rest of it sounds nothing like 'No Rain' and she hated it.  Hated. It.

She was actually going to throw it away and I asked her if I could listen to it first.  I remember, we were upstairs in our high school, at her locker, and she gave it to me right in front of the boy who had bought it for her and said to throw it away if I wanted because it was awful.  Well, I took it home and listened to it and I loved it.  At the time, I loved it as passionately as she hated it.

So is this an important record in the grand scheme of music history?  Perhaps not, but it is important to me. It was then that I realized that it didn't matter what my friends listened to, or what they thought, all that mattered was the music.  If I loved it, if it moved me, then it was cool (to me) and it didn't make any difference what anyone else thought of it.

Keep in mind - that was some pretty profound thinking for a 15 year old.  So, empowered by this new revelation, I embraced the album and with it, my freedom from the constraints of my conservative friends.

What of the album itself?  Its crushing.  It chronicles Shannon Hoon's battle with addiction (one he lost only 2 years later) and with himself.  The pain in his voice is enveloping - you can't escape it.  This album is driven by guitar riffs and unique, melancholy vocals.  The songs (except for that 'No Rain' crap) have a similar feel, but it feels right.

It is not my favorite album, although it might have been for a little while when I first listened to it, but I still listen to it.  I kind of have to be in the mood for it though, because Hoon's haunting voice and lyrics are going to take you on a journey and its best if you're prepared for it.  You're not going anywhere happy, but it is somewhere real.

This record was perfect for me at the time I found it, as a result, I have become pretty attached to it.  I mean, what teenager can't relate to 'Tones of Home'?  "What do you think they would say, if I stood up, and I walked away?  Nobody here really understands me, and so I wave goodbye and I'm fine...I'm fine..."  An angsty teenager's anthem if ever there was one!  And if your heart doesn't break when you hear Shannon Hoon sing 'Drive' then you need to check your pulse, my friend.
Crafted for your reading pleasure by Stephanie at 9:07 PM

Email ThisBlogThis!Share to TwitterShare to FacebookShare to Pinterest
Labels: Blind Melon, Love It