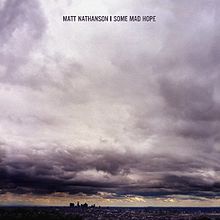 Even though I actually got to this album second I want to talk about it first.  I will try hard not to compare it to Modern Love which didn't exist in 2007 when this one was released.

Taken as a whole, this album feels like a memory.  There is a sense of longing - to get back what has been lost, or perhaps to attain what never was.  Overall, it has a very emotional, singer-songwriter feel to it, but with a lot more soul than anything John Mayer or Jack Johnson has ever put out.  There is a sincerity to Matt Nathanson's voice that just cannot be faked or mixed in on a soundboard.  (If you doubt me on this point, I highly recommend you see him live...you will believe.)

Another thing that stands out to me is the natural feeling of his lyrics.  They never seem forced, or contrived.  The words just flow so effortlessly, like breathing.  It never feels like he was just searching for words that would fit, or rhyme, or whatever.  I read somewhere that he writes the music first, then the lyrics, which makes this fact even more amazing.  These feel like perfect little stories that had music written for them, instead of the other way around.

While this record is overflowing with melodies and beautiful, sincere moments (see: "Bulletproof Weeks"), what it lacks is passion - he needs to bring the sexy.  There is an aching, a longing, a kind of sadness that permeates the vocals, but you're left with the feeling that the passion he sings about is in the past, that it does not exist for him in the present.  Only in "Come On Get Higher", at about 3 minutes, 10 seconds in on the lyric, "so, right", you can hear the sexy dripping off his tongue.  So we're left knowing it is possible, that he has that passion in there somewhere, but it really doesn't come out on Some Mad Hope.

While I love this record for its quiet, introspective vibe, there are some peppy moments ("Come On Get Higher" and "To The Beat of Our Noisy Hearts") that let us know that Mr. Nathanson is not all about strumming his acoustic guitar and pining over lost love.  If we listen closely, it is clear that this record was inspired by some truly magical moments ("Still" - "tangled in hotel sheets, you wore me out, wore me out...").  The memories of these moments are mixed in with accounts of the devastation when a relationship crumbles- or when we crumble in the face of love ("Falling Apart") or we are defeated by the struggle to hold things together ("Sooner Surrender").

In the end, we're left with "All We Are", which gives us hope that, if we can just get our shit together, then maybe something wonderful can happen for us: "All we are, we are, and everyday's the start of something beautiful...something real."

Somewhat off topic point of reference: I was listening to Some Mad Hope on iTunes while writing this post and the next song after "All We Are" was "Fade Into You" by Mazzy Star...the vibe of the 2 songs is very similar.
Crafted for your reading pleasure by Stephanie at 6:48 PM

Email ThisBlogThis!Share to TwitterShare to FacebookShare to Pinterest
Labels: Buy It, Love It, Matt Nathanson, Some Mad Hope