The Doors "The Best of The Doors"

Album: The Best of The Doors
Artist: The Doors
Release: 1985 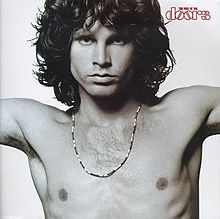 Everyone should have some Doors in their record collection.  They are an American classic and, as such, will enhance any collection.   This particular record isn't one I bought new...in fact, I didn't buy this record at all, but possession is 9/10 of the law, so let's not dwell on details.  :-)  I came to own this album when I was 16, but I had watched the movie a couple years earlier and that's when I really got into The Doors.  I had several of their tapes, but this one is my favorite.  Probably because it is a collection of some of their best songs and it's a balanced combination of rock, blues, sex and poetry.

It opens with 'Break on Through' and 'Light My Fire', which always makes everyone happy, but you know by now that I often skip those and move on to the deeper cuts.  However, truth be told, there really isn't a bad song on this record.  Is it possible to put these musicians together with that voice and end up with a bad song?  I think not.  I even love the semi-cheesy 'Love Me Two Times' and 'Hello, I Love You'.

The low points on this record for me are 'Waiting For the Sun' and 'Spanish Caravan'.  Both songs just fall flat somehow.  They pour out of the speakers and just lay there on the floor, wanting more.  Morrison doesn't sing either with any feeling,  so apparently they lacked for him as well.  They're still decent songs, don't get me wrong, they're just not on the level with the rest of the collection.

The Doors don't get really amazing for me until they get all bluesy with it.  So, of course, it really comes home to me with 'Roadhouse Blues' and 'L.A. Woman'.  Morrison could sing the phone book and find the sexy in it, his vocals are not in question.  But in these two songs, they really found their groove and the music finally serves to enhance the sex that drips off his tongue with every word and growl.

'When the Music's Over' and 'The End' are epic rock songs and deserve posts all their own.  It was listening to these songs that I discovered that, at its best, music is a tangible thing.  It is a place you can walk into...or does it walk into you?  Either way, spaces, vast and cavernous, are created and there are corners, hidden, dark places and only by exploring those places can we come back out to the light.  The music can envelope us, welcome us in and wrap us in its arms.  Before The Doors, I had only listened to music...after them, I learned to experience it.
Crafted for your reading pleasure by Stephanie at 10:06 PM

Email ThisBlogThis!Share to TwitterShare to FacebookShare to Pinterest
Labels: Buy It, Love It, The Doors