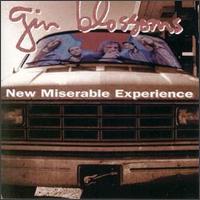 Another early 90's offering, "New Miserable Experience" captures the angst of the era as well as, or better than any other record.  Several of the songs were written by guitarist Doug Hopkins and chronicle his battle with alcoholism.  Hopkins is not listed on the record as a member of the band even though he played guitar on the album.  Presumably due to his addiction problems, he was fired just as the album was finished and replaced with Scott Johnson who did not play on this record.  Slow to catch on, it was almost a year after its release that "New Miserable Experience" finally picked up speed and became something of a hit.  It was about the same time the Hopkins committed suicide.  I only add this because, for me, the story of it has always added to the feeling of melancholy the record has.

At first listen, the songs are peppy enough with a quick tempo and jangly guitars, but the lyrics are heavy.  Take for instance, 'Hands Are Tied' in which lyrics like "I'm a lot afraid that it'll hurt too much, but I can't seem to stop at all" are mixed into fast, happy sounding music.  This juxtaposition permeates the record, which is a lot of why I love it.

I'm not sure why this album wasn't more popular when it was released.  It is another one that I've been listening to regularly since it was new and I've never gotten tired of it.  I definitely don't want to say that the record is perfect or that everyone in the world would love it, but there isn't a single track on it that I skip.  One thing I find so remarkable about it is how convincing the vocals are.  Robin Wilson's pleasant, dependable voice portrays all the emotion behind the lyrics despite the fact that he only wrote 1 song and co-work 2 others.  Personally, I prefer to hear singers sing their own words, or at least words they helped string together, but I think Wilson does an excellent job of making you forget that he didn't write these songs and that the struggle was not his own.
Crafted for your reading pleasure by Stephanie at 9:44 PM