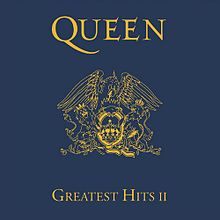 There is no logical explanation for not owning this record.  Of course, "Greatest Hits" and "Live At Wembly '86" are pretty essential too, but if you must choose just one..."Greatest Hits II" is the one.  Throughout its 17 songs and over 2 hours, it encompasses the many facets of Queen and Freddie Mercury's amazing vocal range.

This was the first album I ever owned that was just mine.  All the rest had been handed down from my sister or my dad (or were 8 tracks that my parents owned).  I was 13 when I first heard Queen - I was hooked immediately.  I'm sure that, at the time, I didn't really appreciate Freddie Mercury's genius, or the magnificence of his voice, but I knew magic when I heard it.

This album contains songs written by all 4 band members and an appearance by David Bowie...what more could you ask for??  You won't find any 'We Will Rock You' or 'Bohemian Rhapsody' on this album, these are better songs that that radio fodder.  However, if its a rock anthem that you simply cannot live without, 'I Want It All' will definitely satisfy that urge.

One of my favorite things about Queen is evident on this record...their ability to do songs about serious (or at least, potentially serious) topics but still keep all of their campy charm.  Take 'I Want to Break Free' and 'I'm Going Slightly Mad' for example.  Those songs are fun and all, but I'm much more into some of the heavier stuff on this particular album.

'Hammer to Fall' and 'Headlong' are two of my favorite Queen songs and they both make an appearance here.  Even with Brian May's relentless guitar riffs and John Deacon's overpowering beats, both songs manage to be moving - but not nearly as much as some other tracks.  For instance, 'Who Wants to Live Forever' - if this song doesn't strike a cord in you, then you can go ahead and scratch that living forever thing because you are already dead inside, my friend.

From beginning to end, this record is pretty much perfect.   It showcases one of the greatest bands to ever exist and everyone should have this record in their collection, if only to possess a tiny piece of greatness.
Crafted for your reading pleasure by Stephanie at 11:08 PM