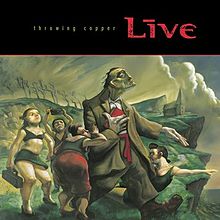 Another sweet album from my youth.  I was 16 when this one came out and I'm sure I bought it because of 'Lightening Crashes' which was all over the radio at the time.  Oddly enough, it is that very song that keeps me from loving this record now.  Ever since a recent loss of great magnitude that my family suffered, I can't listen to that song without bursting into tears.  However, while the song is kind of off limits to me right now, I think that speaks to how powerful it is to me.  It is a haunting song, but I'm kind of surprised it is so popular on the radio.  I mean, there are not that many songs in the top 40 with "placenta" in them, but hey, whatever works.  Overall, the song is about the shift of energy when one person passes away and another person is born.

This is another one of those albums that none of my friends liked, but I played the shit out of it.  If they came to my house or rode it my car, they were going to listen to it.  Apparently it was a major player in the soundtrack of my 16th year.  So much so that, when I listen to it now, it feels heavy.  It makes me kind of nostalgic and introspective, but I still love it.

To my 16 year old heart, 'All Over You' sounded like a perfect little love song, and it still kind of does.  (That statement probably says a lot about me)  It is up tempo for a love song, but with lyrics like, "Our love is, like water, pinned down and abused for being strange", you cannot deny this song.  My favorite song on this record is 'Horse' (hidden track).  "It'd the middle of the night and you're here, playing dominoes and drinkin' beer.  I try to think of somethin deep to say, but my well is dippin' dry today." How can you not love that??

I hesitate to say that this record should be in everyone's collection.  With songs like 'Shit Town' and 'Waitress', its possible that it won't be up everyone's alley, but I'm pretty fond of it.  It has been in my collection (on tape, CD and mp3) for many years and I've never gotten tired of it.  There are fast, upbeat songs that make you want to turn it up ('I Alone'), songs you can sing along with ('Top'), and songs you just want to close your eyes and let them flow over you ('T.B.D.').  But somehow, Ed Kowalcyzk pulls it all together with his vocals.  He has the kind of delivery that just seeps into your brain and takes up residence.
Crafted for your reading pleasure by Stephanie at 11:00 PM