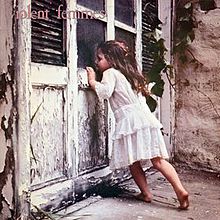 I am, admittedly, a late bloomer (very late, perhaps) to the Violent Femmes scene.  Of course, I was familiar with 'Add It Up' and 'Blister in the Sun', but that was pretty much the extent of it.  After having 'Blister in the Sun' implanted in my head at a recent live show, I finally bought it.  I wore it out for a few days and then broke down and bought the whole album.  Wow.

I fucking love this record.  It is so...out there.  This is a perfect example of the good kind of unexpected.   I never know where Gordon Gano is going with the lyrics, or the vocals for that matter, but it is always somewhere good.  The music is almost like a lighter version of punk and there are some awesome lyrics on this record.  This would be a great summer time record - it is perfect windows-down-driving-fast music.  It just makes me want to dance.

Right now I'm hung up on 'Kiss Off', the second song.  (When I say "hung up", I mean I listened to it 5 times in a row on the way to work this morning, completely forsaking Matt Nathanson - but I'm listening to him right now to make up for it).  Honestly though, there isn't a bad song on this one, they are all catchy and quirky and fun to listen to.  If you're not familiar with them, I would start with 'Blister in the Sun'.  It is probably the most, um, user friendly song on the record.  Its possibly more palatable to people who maybe aren't into music that is quite as off-beat as this than, say, 'Add It Up'.

Although they came along after the punk movement, Violent Femmes feel like pioneers in angst.  Every song is fraught with longing.  He wants everything from "someone to talk to" ('Kiss Off') to "just one fuck" ('Add It Up') and you get the feeling that no matter what he gets, there is still going to be a yearning for more.  Which makes great music.  The awesome thing about this record is that even with all the heartbreak and misery, it's not a downer.  Instead of making you sad about the things that suck, it makes you want to scream them at the top of your lungs and get even for the wrongs that have been done to you.  "You can all just kiss off into the air, behind my back I can see them stare, they hurt me bad, but I won't mind, they hurt me bad, they do it all the time!" - 'Kiss Off'

I'm hoping this one is still available on vinyl (or that I can find it) because it is exactly the kind of record you want to experience all the way through, not in little digital bites.  Every song stands alone, but together, this record is greater than the sum of its parts.
Crafted for your reading pleasure by Stephanie at 1:08 PM

Email ThisBlogThis!Share to TwitterShare to FacebookShare to Pinterest
Labels: Love It, Violent Femmes