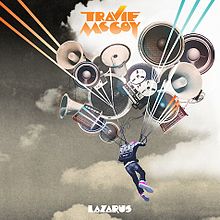 On the eve of Gym Class Heroes' new release "Papercut Chronicles II", I thought I would bring you the lead singer Travie McCoy's solo offering, "Lazarus".  You may not think you know who Travie McCoy is, but believe me, you do.  Unless you live under a rock, you were exposed to his massively popular duet with Bruno Mars, 'Billionaire' this summer. (Wow, that sentence tried to sound dirty...) That song was freaking everywhere, and rightfully so, it is catchy as hell.  Co-written by Travie, presumably back when he was broke, it was the lead single off "Lazarus".  I was addicted to this song over the summer, so I grabbed this album when it was still hot off the presses.

"Lazarus" (which, incidentally, is Travie McCoy's middle name) features enough collaborations and features that it doesn't really feel like a solo album.  It really feels more like someone recorded a jam session among a bunch of friends, which is cool.  'Need You', the second single, is one of the few times that it feels like we're really hearing him, and not just another party anthem.  In it, he asks for time to repair the damage done by some other heartless wench so he can be the man this new girl wants him to be.  It is really a love song, but from the perspective of a broken person who really wants to have another go at it.

Another genuine moment is 'The Manual' which features T. Pain & Young Cash.  With lines like, "My faith got misplaced, between who I was before and the dude you think you know" you understand that he's trying to figure out how to marry the real person and the stage persona. To some extent, we can all relate to this song - how to we co-mingle the people we are inside with the people our friends, family and bosses need and expect us to be?  Somehow, this song seems heartfelt even though the chorus is lost is auto-tune hell.

The rest of the album is pretty much just a collection of songs that make you want to roll the windows down, turn the radio up and drive way too fast.  My favorite of these is by far 'Dr. Feel Good' which features Cee Lo Green (of 'Fuck You' and Gnarls Barkley fame). And no, it is not a remake of the Motley Crue song as I originally feared/hoped when I saw the title of it.  'Superbad' is also an awesome tune.

My only problems with the record are 'Akidagain' and 'Don't Pretend'.  The first, well, I just don't like it.  The verses are alright, but the chorus just grates on my very last nerve. It is little kids singing it (or is made to sound like little kids...whatever), either way, it doesn't make sense.  They ARE kids, why would they be singing about being a kid again?  And furthermore, the sound of children singing is just unpleasant.  Yuck.  And as for 'Don't Pretend', somehow it just reminds me way too much of Biz Markie's 'Just a Friend' for me to really get into it.

Overall, I like this record, I really do.  There are a couple songs that I skip, but there are also a few that I repeat...again and again.  I like it enough that I'm looking forward to seeing what Travie and Gym Class Heroes are going to give us tomorrow.
Crafted for your reading pleasure by Stephanie at 11:03 AM