Train - "Save Me, San Francisco" 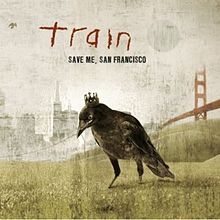 I would like to preface this post by saying that I love Train.  I love them.  I've seen them twice in concert, I loved Pat Monahan's solo album, I loved their live album.  What I'm saying is, I'm a fan.
But, and this is a big but, I'm not in love with this album.  In fact, there are parts of it I don't even like. Still, one of my favorite Train songs ever is on "Save Me, San Francisco", so I have to at least rate it as "like it".
"Save Me, San Francisco" was released almost four years after "For Me, It's You" which has been called a commercial failure.  Personally, I thought it was a much better record, but what do I know?  Apparently they considered breaking up after that one, and Pat did a solo record, but they got back together (thank goodness!) which I thought was a wonderful thing.  Then they released this record.  Bah.
The first single, 'Hey, Soul Sister' does sound like classic Train, I'll give it that.  But the radio stations around here ran that thing into the ground so badly that by the time we saw them perform it live, my sister and I actually looked at each other and rolled our eyes.  We're that sick of it.  It's not a bad song, but it is not one I want to hear over and over and over.
The next single was, 'If It's Love﻿".  Ugh.  My least favorite Train song ever.  It is hugely popular and goes over great when they perform it live.  But I just don't get that. This one feels to me like they were just phoning it in big time.  I have come to expect so much more from them, lyrically, over the years.  I mean, "Can't be a bee without a bee throne"?  Are you fucking kidding me?  The same guys who brought us lines like "What am I gonna do without you?  What am I gonna do about you?" ('Your Every Color' - "My Private Nation") expect me to take lyrics like "We can travel to Spain where the rain falls mainly on the plain, sounds insane cause it is, we can laugh, we can sing, have 10 kids and give them everything" that fit awkwardly in the music and just be cool with it??  Frankly, I'm kind of insulted.
But, not to be a total downer, this record also contains 'Parachute', which is a really great love song.  And also 'Half Moon Bay' which is one of my favorite Train songs ever.  It is very sweet and upbeat and just fun to listen to and sing along with.  Lines like "This ain't a threat but I think I better warn ya, you're gonna fall in love if you go to California" are clever and well constructed.  It's a good song.
Overall, if you're not familiar with Train (shame on you!!) don't start here.  I just think they're better than this.  I would recommend starting with "My Private Nation", it is a great record, then go back to "Train" and "Drops of Jupiter" to see where they came from.  Then once you appreciate them at their best, you can give this one a listen and enjoy the high points, and overlook the "meh" points.  Myself, I can forgive them this one because I love them and they have done enough incredible music that I know it is just a fluke.
Crafted for your reading pleasure by Stephanie at 10:56 PM