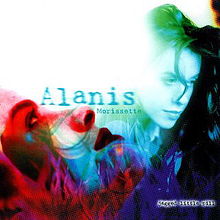 I bought this record when it was pretty new in the summer of 1995 when I was 17 and every bit as angry and dysfunctional as Alanis must have been when she wrote these songs.  That winter, I wore this album out in my car to the point that I still feel cold when I listen to it.  I have a couple more of hers, after she chilled out a bit, but I have to say that I really prefer the angry-Alanis of the mid-90's.  What I like best is that she was able to articulate every bit of bad blood and her vocals did not let her down in expressing how she felt.

It starts with a harmonica followed by a riff on 'All I Really Want'.  The first line being, "Do I stress you out? My sweater is on backwards and inside out and you say, how appropriate."  I knew right then that I was going to love this record.  This song is heavy with harmonica which is unusual, to say the least.  But somehow it works - don't ask me, I can't explain it.  Everyone has heard 'You Oughta Know' - they've played the shit out of it on the radio for the last 16 years.  It's a good song.  I like a song with a story and this one definitely has one.  I also like a song that is wrought with raw emotion and this one hits the mark there too (also, it was a chance to sing "when you fuck her" at the top of my lungs and those chances were rare among my CD collection in 1995.)  A woman of any age is going to appreciate a song that laments the way a man seems to be able to move on from a relationship without looking back while the woman is left holding all the emotional baggage.  (To be clear, not all men, not all the time, but this is how a heartbroken woman sees it.)

Next is the quiet, heartbreaking 'Perfect'.  This song explores the experience of kids who are made to feel that nothing they do is ever quite good enough.  To the point that maybe even perfection wouldn't be enough.  This one struck a chord in me that makes it tough to hear to this very day.  'Hand in My Pocket' is a song you can relate to and its catchy.  With lines like, "and what it all comes down to, is that it everything's gonna be quite alright", it makes us think that under all that anger, maybe Alanis has hope.  Maybe.  Then she turns around and stabs misogynistic society in the gut with 'Right Through You'.  Surely every woman knows what it feels like to be overlooked or underestimated simply because she is female.  This song is flat out pissed off about that.  While I am absolutely not a feminist, I still enjoy the sentiment of this song.

My absolute favorite song on this record is 'Not the Doctor'.  It's kind of quirky and strange sounding, but when I first heard it, it was a perfect fit.  I was in that stage of life when the lists in your head are all of the things you will not do for people and who you do not want to be, rather than what you are or what you can offer.  Because at 17, who knows what they are?  So a song listing all the things that this woman is not and does not want to be for a man was a perfect.  She follows it up with 'Wake Up', which is another good one.

Overall, after listening to this record a couple times, I've realized that I don't love it nearly like I did when I was 17.  It takes me back to that time, it brings back a lot of memories and dredges up a lot of emotion - which is cool.  But my life is pretty far removed from what it was when I was 17 and I just don't relate to a lot of it the way I used to.  But I still blow the dust off this one occasionally and take it for a stroll down memory lane.
Crafted for your reading pleasure by Stephanie at 10:12 AM